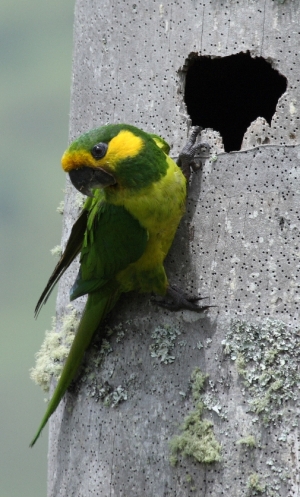 ProAves is a purely conservationist NGO, which for more than 10 years has been implementing and developing tools and conservation activities, in order to mitigate the impact caused by the man on the habitats of endangered species.

The ProAves conservation area works to contribute to maintaining the quality and availability of habitat for conservation of priority bird species through the establishment and management of nature reserves in civil society and to develop other forms of protection supported by a concept of self-sustainability and community integration, influencing local, regional and national environmental protection.

We have thus managed to retain under our Natural Bird Reserves 30,503 hectares of various kinds of ecosystems, and restore and reforest 1,200 hectares and establish 3,600 hectares under figures of Payments for Environmental Services.

A new generation of Eco-Guides in Colombia
Thursday 2 August 2012.

The 3rd Eco-guide Training Course was undertaken by professional guides from 13-21 June in the Las Tangaras Bird Reserve with rural community citizens and Reserve Rangers. A new generation of highly trained guides in birding and nature guiding will provide outstanding services.

The recent change in the threat category for three Colombian endemic bird species – now no longer in imminent danger of extinction – is in large part thanks to the conservation and research efforts of ProAves, particularly with its strategic network of 21 Bird Reserves across Colombia.

Generous donations to rangers help protect the forest home of the Two-toed sloth and a multitude of other threatened species.

In September, ProAves assisted two property owners in Roncesvalles, Tolima, to commit to preserving the majority of their land that is within the town’s watershed. As agreed, for at least ten years, the total of 3,200 acres will be saved and restored for natural habitat conservation.

The wetlands of Bogotá – critical habitat for birds
Monday 1 August 2011.

At the invitation of the Association EcoVida, our collaborator Monica Parada gave a Talk: “The wetlands of Bogotá and Cundinamarca, an important habitat for waterfowl in Colombia”, in the Wetlands Course with the lakeside community of Santa Maria del Lago.

ProAves presented its progress on establishing some of Colombia’s first environmental service agreements in Tolima to the Global Environment Facility (GEF) Council between 23 to 26 May 2011 in Washington DC.

To socialize the actions and strategies undertaken at local level aimed at the protection and management of the Páramo del Sol, on 9th December ProAves held a workshop on “Management, Conservation and Protected Areas of the Páramo del Sol”. ProAves is working to protect this highly vulnerable AZE site.

The Corporación Autónoma Regional CorAntioquia, celebrated its 15 years of work with a ceremony in which it acknowledged ProAves with a Life Distinction, the highest award given to organizations who have worked diligently and consistently for the preservation of natural resources in Antioquia.

Under an agreement established with the Conservation Organization RARE and through Pride Campaign, ProAves is promoting actions aimed at the conservation of ecosystems that offer environmental goods and services to generate environmental awareness in communities.